The news of anyone’s passing should be treated with dignity and respect, especially if they are a highly respected judge like Ruth Bader Ginsburg. However, given her liberal stance, the passing of Justice Ginsburg will be seen as an unprecedented opportunity for conservatives to win back key ground, especially when it comes to abortion.

Appointed by former President Bill Clinton in 1993, Ruth Bader Ginsburg, or ‘RBG Notorious’ as she was affectionately known to her supporters, was the second woman to become a Supreme Court Judge. She was a champion of woman’s rights and equality but no friend of the unborn child. A Democratic appointee she was lauded by many, including the Obamas.

“Michelle and I admired her greatly, we’re profoundly thankful for the legacy she left this country,” Barrack Obama said in a statement following the passing of Justice Ginsburg. “We offer our gratitude and our condolences to her children and grandchildren.”

However, the former President also demanded the Trump administration allow her Supreme Court seat to remain vacant until after the election. “Four and a half years ago, when Republicans refused to hold a hearing or an up-or-down vote on Merrick Garland, they invented the principle that the Senate shouldn’t fill an open seat on the Supreme Court before a new president was sworn in,” Obama concluded. He is now demanding the same procedure be upheld this time round.

Despite this demand, it seems President Trump will act quickly to replace Justice Ginsburg before the election. He has recently published a new list of potential candidates for the Supreme Court including three current senators. This means another senate hearing may soon be underway which could see another character assassination similar to what Judge Brett Kavanaugh was subjected to. Hopefully, President Trump’s next nomination will not be subjected to such venom.

The stakes are high, the Republican Party are obviously keen to tip what was the status quo of five conservative judges to four liberal judges. They have an opportunity to take the Supreme Court to six conservatives with three liberals. This seems to be the reason Justice Ginsburg held on so bravely for so long despite ill health and her final bout with cancer.

On the one hand, it seems like President Trump needs to appoint a new Supreme Court Justice immediately as a safeguard should he lose the election however his supporters are confident that not only will he be re-elected he will get to appoint even more judges over the next four years. He has already appointed two – replacing Ruth Bader Ginsburg will be the third.

Many believe that abortion is the issue that will be the deciding factor in this election. See Vote for Life, US Election 2020. After countless prayer rallies and Marches for Life, there finally seems to be a real chance to overturn Roe vs Wade and reduce the number of abortions carried out in the USA. This would be a massive answer to prayer for the Pro-Life Movement and the many Christians trusting God for revival as the American people come to a place of repentance so that healing can flow throughout the land.

Sat Sep 26 , 2020
Share on Facebook Tweet it Email Some 50,000 people of all ages gathered on the National Mall on Saturday September 26 for Prayer March 2020 hosted by Franklin Graham and featuring many of America’s best-loved Christian leaders. What an amazing sight to see so many believers rallying to intercede for […] 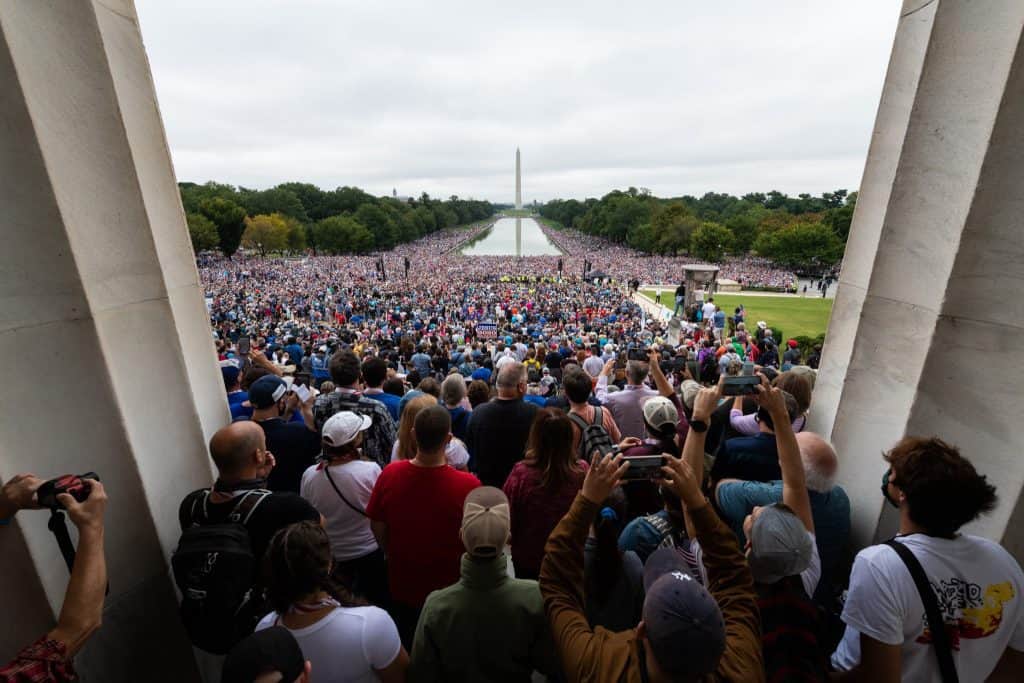