‘Gay marriage’ continues to be an issue around the world as same-sex unions are legalised in many countries. Politicians argue that it is simply a principle of equality, giving all people the right to marry whoever they wish. It seems only fair?

But does Government legalisation make something right? For Bible-believing Christians, abortion is morally reprehensible, yet we accept a woman’s right to choose. We now have to accept the legal status of married gay couples no matter what our personal views are or what we believe the Bible teaches on homosexuality.

What should the Christian perspective on gay marriage be? The Archbishop of Canterbury says the Church of England has reacted by fully accepting gay marriage is now law and Christians should continue to demonstrate the love of Christ to all people.

Of course, Christians are called to love all people, even their enemies, so love is not the issue. But, can you love without condoning? Many Christians will be quick to jump in with the much-used cliché, “love the sinner, hate the sin”. Is that a helpful approach and what does it mean in practical terms?

This still has to be worked out for many Christians as they find a way to come to terms with married gay friends or neighbors… Could it be that, yes Christians must embrace others, even if they disagree with their choices, and through their Godly witness, show them there is a better way?

This is how one would react to a neighbor of another faith. Clearly the Christian community can be welcoming and respectful to people without agreeing with them on everything. Yet they still need to stand up for what they believe.

It is a complex issue, but perhaps it really is as simple as this… It all boils down to what The Bible says and whether people choose to obey the textbook of their faith or not. Some would argue that the Scriptures clearly condemn homosexuality as an abomination, others would say that homosexual sin is no worse than any other sin… What does Jesus say?

What does Jesus say about being gay?

“Then He said to the crowd, ‘If any of you wants to be My follower, you must turn from your selfish ways, take up your cross daily, and follow Me. If you try to hang on to your life, you will lose it. But if you give up your life for My sake, you will save it. And what do you benefit if you gain the whole world but are yourself lost or destroyed? (Luke 9: 23-25)

Christians are called to give up our lives for the cause of Christ. Giving up a gay lifestyle is nothing compared to giving up one’s life or any lifestyle that goes against God’s Word.

For Bible-believing Christians it’s not a question of whether or not its right or wrong to be gay or even enter into a same-sex marriage. It’s clear that whatever they do that is contrary to God’s Word keeps them from living a victorious life for Christ.

Those who struggle with same-sex attraction are invited to release the burden of their gay struggles even if that is the cross they have to bear and choose to follow Jesus daily, accepting the truths that he taught and believing He will ultimately give them victory. In the same way, whatever cross we may bear, due to our unique, personal weaknesses, we are invited to take it up and follow Jesus. In this way, we will find our lives and not lose them.

Also read: LGBTQX – Could this variation on the LGBTQ acronym include those who identify as Ex Gay?

If you have an unwanted same-sex attraction, visit The Restored Hope Network which declares that Jesus has life-changing power for all who seek Him.

One thought on “Not my Gay Way, But Your Will be Done!”

The death of George Floyd must bring change

Thu Aug 13 , 2020
Share on Facebook Tweet it Email Following the unjust death of George Floyd and the subsequent protests and violence, former Vice President Mike Pence attended a Listening Session with black faith and community leaders. It was hosted by the late Bishop Harry Jackson of Hope Christian Church in Beltsville, Maryland […] 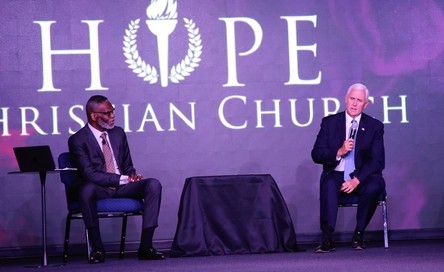