The holidays are here, with all the festivities and traditions we participate in. It’s a time of year where I like to look again at what the Bible says about Jesus, as there are some things our culture takes for granted or espouses that may not align with what the true story of Christmas shows us.

The Magi came from the east with a large caravan, asking, “Where is the new king of the Jews?” This alarmed the city, as well as King Herod and the Jewish religious leaders, who were aware of the written prophecies concerning the Messiah (Matt. 2:3).

The Origins of the ‘Wise Men’

These wise men acknowledged Jesus as King and were theologians and astronomers, being aware of the signs that would be revealed when the Messiah was born. Coming from the East, they were perhaps from the discipleship lineage of Daniel, who prophesied about the Son of Man, who was given dominion and glory and an everlasting kingdom, in Dan. 7:13-14.

These kings more than likely had the Torah in their possession and possibly correlated Num. 24:17 to the star they saw from the East. With the Scriptures they had and knowing the prophecies of Daniel, upon seeing the star, they embarked on a long journey that led them to Jerusalem, where they were provided more insight on where they were to find the Christ child as the chief priests and scribes quoted Mic. 5:2 (Matt. 2:4-12).

Then the Magi, with their caravan, saw the star above a house in Bethlehem. With great excitement, they entered Jesus’ home, giving Him gifts fit for a king and worshipping Him. They were not bringing gifts for Herod, who was appointed king by Rome. Their gifts to Jesus were not in the gift boxes we see in the traditional nativity scenes. But were instead extravagant gifts of gold, frankincense and myrrh, carried by camels and servants and perhaps set up for display after they arrived in Jesus’ home. The gifts were representative of the nations coming to Jesus and were an abundance.

Jesus was born king, and near the end of His ministry, He acknowledged his royalty. Luke 23:3 shows Pilate asking him, “‘Are you the King of the Jews?'” and Jesus said, “‘You truly say so.'”

After His death and resurrection, Jesus ascended into heaven and sat down at His rightful throne. Hebrews 1:3 says, “He is the brightness of His glory, the express image of Himself, and upholds all things by the word of His power. When He had by Himself purged our sins, He sat down at the right hand of the Majesty on high.”

This Christmas, we are assured that Jesus is king. He reflected the glory of God and holds everything together. Our loyalty is to royalty. He fulfilled over 350 prophecies and is the “ruler of the kings of the earth” (Rev. 1:5b).

Holiday Truths that will prepare you for the year ahead

Over the holidays, and as 2022 unfolds meditate on these scriptural truths:

1. Jesus is seated at God’s right hand, and our affections are to on Him. Col. 3:1 says, “If you were then raised with Christ, desire those things which are above, where Christ sits at the right hand of God.”

2. We are seated with Christ in heavenly places, and our loyalty is to royalty. Eph. 2:6 says, “And he [God] raised us up and seated us together in the heavenly places in Christ Jesus.” Who we are is determined by whose we are; we are children of the king, seated with Him.

Right at the start of 2022, rekindle your loyalty to royalty, and celebrate Jesus as King of Kings and Lord of Lords, with your friends and family.

Also, listen in and subscribe to ‘Adventures in the Spirit’ podcast on Apple, Spotify, Google, Charisma or anywhere you listen to podcasts.

Sun Nov 27 , 2022
Share on Facebook Tweet it Email The global phenomenon known as The Chosen is making headlines again with another run in US theatres as well as in cinemas internationally with its latest launch. Audience demand for the premiere of the first two episodes of Season 3 has driven an extension of the […] 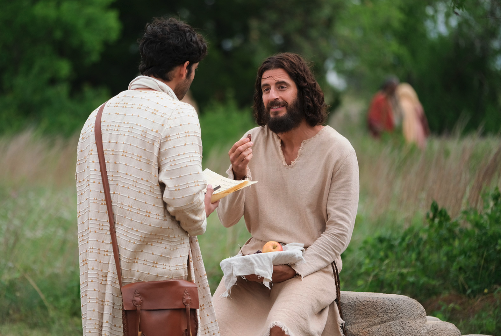